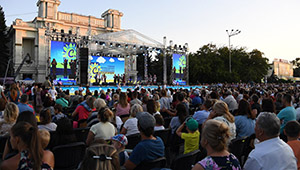 The festival "Sunny Island" was once again held in Yevpatoria. It is dedicated to children's and family Russian cinema.

An exciting show program awaited the guests of the event, which culminated in the screening of the film "Treasures of Yermak."

Tourists who were interested in entertainment in Yevpatoria in early September, were able to plunge into the world of childhood for several days. At the festival "Sunny Island" interesting creative meetings, fascinating master classes, conferences with guests of the event were organized. Famous and beloved artists took part in it: M. Boyarsky, O. Mashnaya, S. Nikonenko, I. Muravyev and many other movie figures.

At the festival, the best films were selected in various categories. They were evaluated by students of different schools of the city of Yevpatoriya, who determined the winners among all the art and animation films. And on September 5 at the theater. Pushkin received the awarding ceremony and the ceremony dedicated to the closing of the festival, the president of which is the People's Artist of Russia D. Kharatyan.